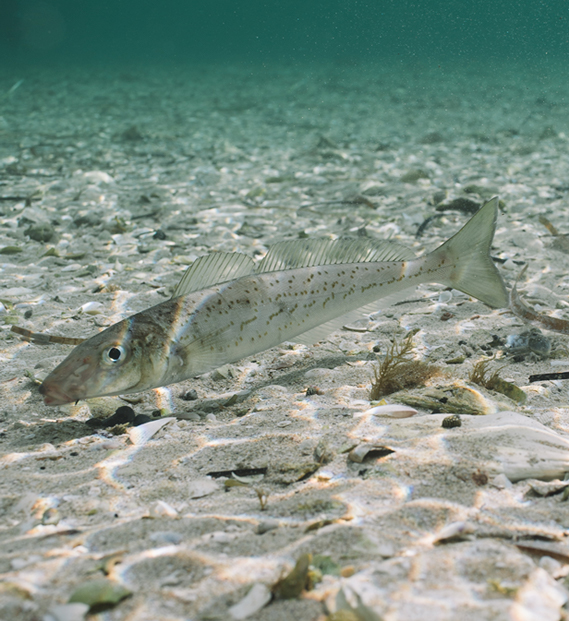 The largest and most sought after of all whiting species is King George Whiting. This particular species of whiting can live as long as 15 years of age and grow to a whopping 70cm, although the average is closer to 35cm.

King George Whiting are located around the coastal and estuarine waters of Australia’s southern coast line, but South Australia (particularly the Eyre Peninsula) boasts the largest expanse of natural habitat for this species. Hence it has become such an iconic fish for South Aussies. They are typically found in broken bottom areas (sand and weed). KG Whiting spawn from April to June in the deep, offshore waters. Fertilised eggs and larvae are carried by the ocean currents to sheltered bays and estuaries where the water is warmer. Here they remain for 2-3 years (reaching approximately 28cm). At age 3-4 years the whiting are considered mature and begin their journey to deeper offshore waters.

Fun fact: Typically King George Whiting found on Port Lincoln side of the Peninsula, are larger than they are on Coffin Bay side.

The minimum legal catch size across all sectors for King George Whiting is 30cm. KG Whiting is typically line-caught, this type of fishing method having the lowest impact on marine habitat with little to no bycatch.

Fishery stocks are closely monitored and regularly audited by the South Australian Government. In 2017 measures were instilled whereby key spawning grounds were made completely off-limits during the KG Whiting’s critical reproductive period (1st-31st May). During this time the taking and/or possession of King George Whiting by all sectors (recreational, charter or commercial), from these zones is strictly prohibited.

Today stocks are well up on recent years and the fishery is now classed as sustainable.

King George Whiting feed on worms, bivalve molluscs and small crustaceans. This diet of sweet protein is what gives KGW their bright white flesh, tight fine flaky texture, and delicate subtle flavour. Whiting is best prepared simply, as flavour can be easily taken over by herbs and spices or over-seasoning.

Per kilo
Per whole fish